With Jon and I both testing MFactory's new coilover system for the Focus ST, we would now have camber adjustment for the front struts. We weren't happy with idea of having to drop the strut each time we needed to access the camber plates. We decided to look into a solution. Looking around I quickly found on other cars it's fairly common practice to simply cut the top of the strut tower out to get access to them from up top. Below is our how to, so that you too can have access to your camber adjustment without having to drop the strut. The method we used was to use a hole saw to drill through the frame. There are other routes you can use such as a hydraulic punch kit, plasma cutter. We did not use these methods, because we did not have access to either of them, and the cost of purchase or rental for us would have been more than the cost of parts in the drill method, at least for our area. 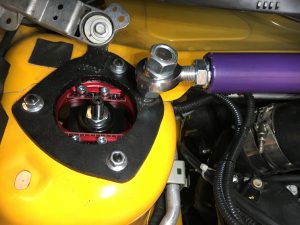 Note: This can be done without the TB performance brace, but for this How-to it plays a crucial part, and since both of us who were doing this mod had this part we didn't plan an alternative.

Disclaimer: Neither Sith Racing nor the writer of this post is responsible for any damage, or injury during or after this install. You perform this install at your own risk.