The Damond Motorsports Passenger Side Motor Mount is a replacement for the stock motor mount. I received one of these mounts as part of the Damond beta test, before final release to the public. I've had the mount on the car for about 3 weeks now, and have racking up close to 700 miles on it.

What makes this mount different from the stock mount is that it flips the bushing from the Vertical plane to horizontal.  This changes how the vibrations from the engine are transferred through the bushing,  to the chassis. This allows you to run a stiffer bushing, yet have it feel like a softer bushing. The bushing in the Damond mount  a 88a durometer polyurethane bushing. Unlike, some of it's competitors, the mount is also a two piece system, which allows for a further reduction in vibrations, and increased adjustment.

Note for the tests below: The equipment used for these tests was my iphone 6s, using an app. To make the tests as relevant as possible, I kept as many factors as I could the same. Things that were kept the same: Location, gas volume, people in car, climate control/stereo off, phone location, temp, windows, tire pressure. The only direct change I made was switching out the mounts. Although, the testing equipment may not be accurate, the data is still relevant to each other, for comparison. This data though will not be relevant to other vibration tests, done with a different phone or app.

The main thing to note on these graphs is the value of the Z axis.

These 2 graphs are from my old engine mount setup. At a cold start idle, including turning the car on. 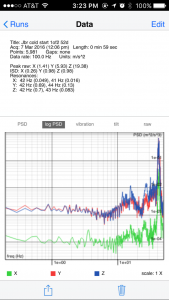 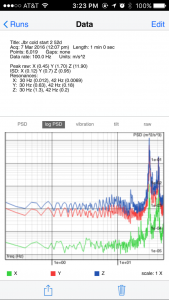 These 2 graphs are from my new engine mount setup. At a cold start idle, including turning the car on. 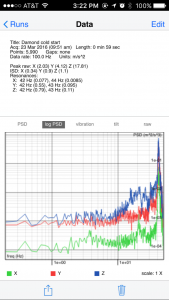 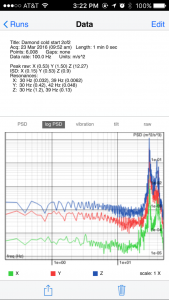 The next is with my car idling at full operating temp, and oil at 180-185 degrees. The left is the JBR mount and Right is the Damond.

The last set of graphs is again with the car at full temp, with oil at 180-185 degrees. This time I had the AC on, with the AC temp at low, to maximize the compressor. The left is the JBR mount and Right is the Damond. 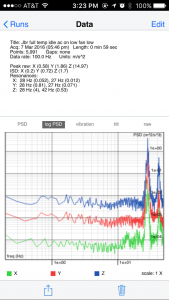 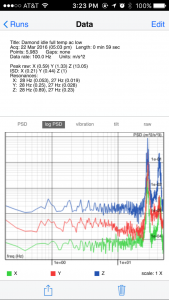 So now that you've looked over all the graphs you're probably thinking, what does this all mean, and how is it relevant. The numbers show a consistent decrease in vibrations with the Damond mount installed over the JBR mount. The numbers don't show a huge difference, but it is a difference you can feel. Which is the most important part. This verifies the fact that there is a difference in vibrations and it's not just caused by a placebo effect of having a new part. Another thing to note is my JBR mount is the softest of the bushing available by JBR, and is softer than the TurboTechRacing(TTR) mounts as well. This mount also has over 10,000 miles on it, while my Damond only has ~700. With polyurethane bushing, it takes time to break them in. Going from experience and from people with other mounts, most believe the break-in period for mounts are around as follows. The first noticeable break in, occurs around 100-200 miles, then again at around 1-2k miles, with them finally being fully broken in at 5k. These break-in points will vary depending on how the car is driven.

To show that here is the first startup on the Damond mount, engine still warm.

You can see it had a peak of 15.54m?s^2 compare that to the warm idle after ~700miles( 11.34m/s^2), you can see that the mount has already started to break in. I suspect that if I perform this test again after a few thousand miles, that the idle vibration would be lower than it is now.

I tried taking these graphs while driving, but the unknown variables became to great, to keep them comparable. Things like, RPM, Speed, Gear, Road, Lane, Throttle, Cars around, Shift, etc, just made the results unreliable.  I can say though, that vibrations while driving are also down. The reduction is vibrations is just as noticeable, if not more, than the idle vibration difference. Previously, with my JBR setup I would get random intense vibrations on deceleration between 3200-3000 rpm. It is believed, that this is caused by the dual mass OEM fly wheel. Reason for that is friends who are running a light weight wheel, no longer experience this issue. With the Damond now installed, I still get these vibration spikes sometimes, but the vibrations are significantly less.

With aftermarket motor mounts, you'll get increased engine noise. Some mounts increase the noise level more than others.

Again in keeping with data relevance, the same testing conditions were used for these tests, as the tests above. These tests were done at full temp, idle.

My car is running a GTX2860, with MBRP high flow catted downpipe, and FWSerks Stealth exhaust.

The left is JBR the right is Damond. 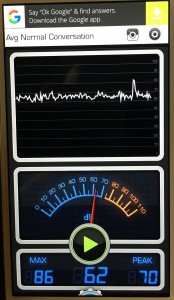 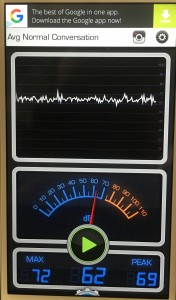 To read the graph, the Max value is the maximum decibel recorded, the middle value under play, is the current level, and the right digit is the peak.

The graph shows that the peak db went down when switching to the Damond. In the graph you can see the spike where the 86db was heard. Whereas, the rest of the graph is roughly the same. This spike could be an abnormality, but from having the mounts in the car for the last 10K I can say that random noise/vibration spikes were normal.

I can not say how much cabin noise was increased over stock mounts, as I do not have a test with stock mounts installed, with the same mods, so it wouldn't be relevant. Although, the idle test doesn't show a change in decibel volume at idle, while driving the car is quieter. Again, I came across the same issues I had while trying to do a vibration test while driving, there was to many uncontrollable variables.  I can not say by how much, but it is a noticeable difference.

So now that we've gone through all the changes of increased vibrations and cabin noise, how does this mount make the car handle and feel. To put it bluntly, awesome.

Having the passenger engine mount installed along with the rear engine mount, keeps the engine from moving around. Most people reading this probably already have a rear engine mount and weighing whether or not it is worth upgrading the upper mounts as well. With the upgraded rear mount, itstiffened up 1 of the 3 mounts of the car, helping to alleviate the engine pitching on you. The upper mounts take that same concept but apply it not just to pitch but roll as well. The engine now doesn't move forward, back, or side to side.

How does this help you, though? When accelerating hard the engine doesn't shift, meaning there isn't a weight shift, as the engine moves backwards. This means better traction and no wheel hop. The increased traction is especially noticeable during hard launches, you're able to get more power to the ground, and thus accelerate quicker.

The same does for braking. When you break hard, without upper mounts the engine is going to roll forward. The rear mount can't apply enough force to the engine to fully prevent this, as the rear mount is mounted down low. The engine not rolling forward, again means no weight shifting around, and the weight stays over your front wheels, giving you better braking. Your car stays planted more during hard braking in turn, increasing your braking efficiency.

The last motion upper engine mounts affect is roll. Your engine now, is unable to shift from side to side. When going into a corner your turn in, is much more stable and predictable. You'll be able to go into a corner, with much more certainty as you don't have a few hundred pounds of weight shifting on you.

The Damond mount accomplishes all of these things perfectly. The engine stays nicely planted regardless of the type of driving your doing. Last weekend at autocross the car felt as stable as ever, with no sudden weight shifts. As I stated above, I previously had the JBR 70a PSMM installed, coming from that mount to the Damond, the engine feels more planted, with less movement.

To summarize everything up, the Damond mount is able to minimize engine movement to the same effect, if not more than it's competitors, while providing less cabin vibrations.

Make sure to check out Damond Motorsports to pick up one of these mounts.